How to create a report template including 2 distinct images

PierreD
July 2016 in Image-Pro Automation (Macros, Apps, Reports)
It is often useful to be able to display multiple images in one single report, each one representing a different thing. A typical example would be to show the original image and then another one that would be the result of some process.

In order to be able to do this we are going to need to define report fields coming from 2 different data sources pointing at our images of interest. In this tutorial, we will use the image position in the most recently used list as the image selector, but other identifiers could be used, such as the image name or the image activation to show the active image.

In the report template designer data is selected using "Select Report Data..." (this is invoked automatically when creating a new report).

Once in the "Select Report Data" dialog, we can add 2 instances of the image data properly configured. The first one will be named "Image" (the default) and will display the most recently used image (Image MRU Index is 0): 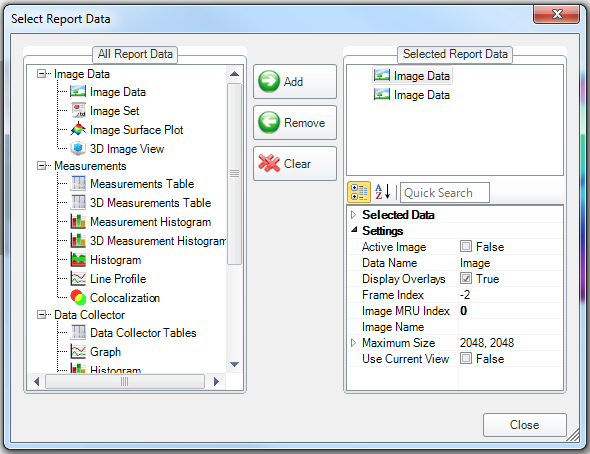 While the second one will be named "Image2" and will display the second last image activated  (Image MRU Index is 1). 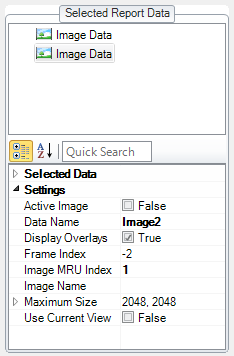 Once these data sources have been defined, we can simply drag and drop a view from each source into our report.and adjust the layout according to our needs by converting tables to paragraphs if needed (List tab in the Report ribbon) and possibly using multiple columns as illustrated below.